Many of us are already familiar with Gradient Descent but have bitter experience in understanding it. When we think about gradient descent, we remember the terrible mathematical formula and see some horrible pictures of the 3D surface plot in our eyes like the following- 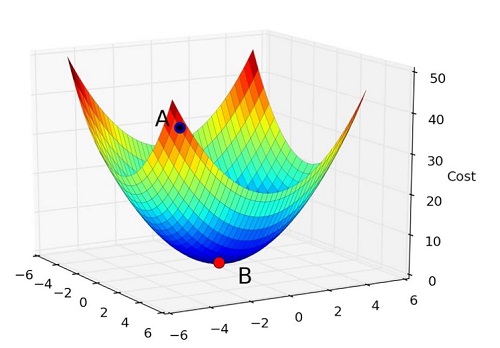 How terrifying the picture is as well as it’s formulas! But, it is actually not like how it looks. It is very easy, interesting and very practical concept.

So, let’s forget the terrifying plots, formulas and the bitter experiences and make a new start.

Let’s say, we put a ball on the upper edge of a pond and give a little push on it, just like the following picture. Now, what will happen?

Now, our task is to find the minimum value of the function. That means, we need to find such an input value for the $x$ for which we’ll get the minimum output value from $y$.

Now, let’s put all the given values of $x$ into the function and see the output values of $y$.

Now let’s see, for the given values how the function looks like in graphical representation. 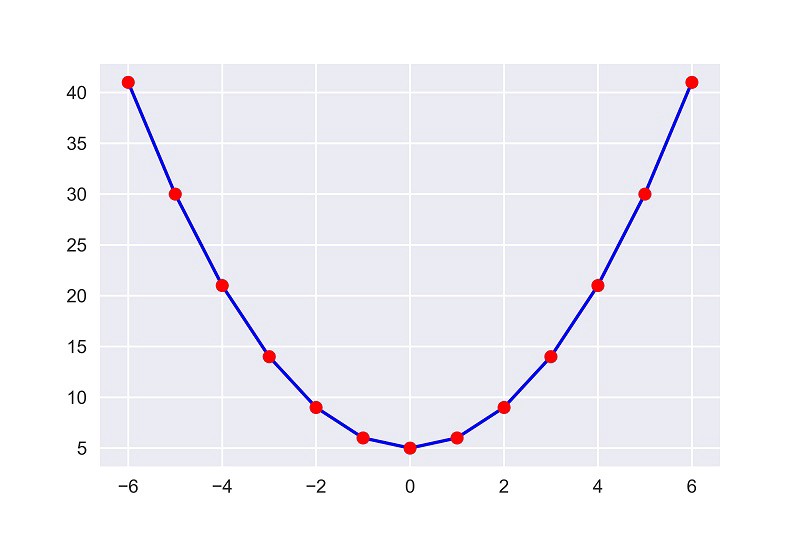 The most interesting fact here is, the plot looks same as the picture of the pond we’ve used above.

That’s great! Our learning has become much easier. 🤘

Now, if we put a ball on the upper edge of the plot and give a little push on it, as we done before in the pond picture. What will happen? 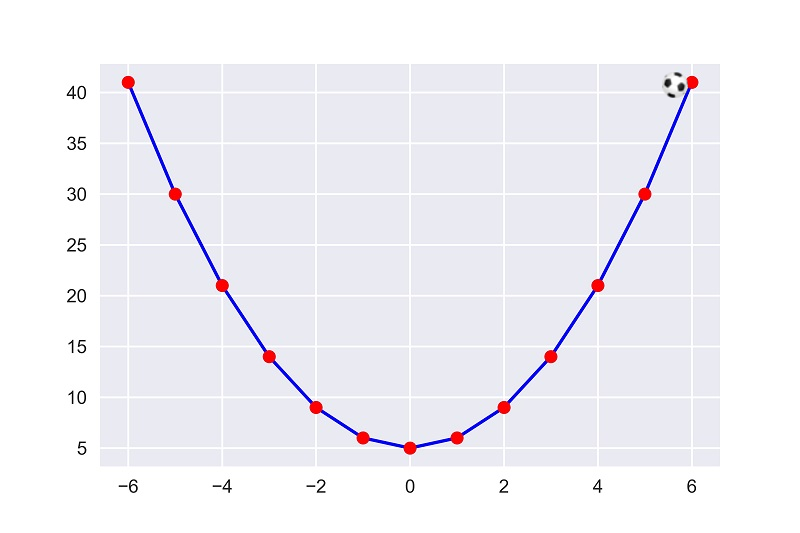 Nothing will happen. Because the gravitational force works on earth, not on our plot. The ball will remain in the same position where it was put before. Then, how can we take the ball to the minimum point of the graph?

To do this, we need to know 2 things-

Now, it’s time to know about the Gradient Descent. Let’s see how can it help us.

Gradient Descent is a first order iterative optimization algorithm that finds the minimum value of a function.

We’ll know what it means by “first order” and “iterative” later.

The formula used in Gradient Descent:

The formula will tell us the next position of the ball. It’ll tell us the direction of downward slope with the number of units to roll. You’ll find this formula written with different notation as follows–

Now, let’s learn the meaning of the notations used in the formula-

As we told before, we can set the value of $\gamma$ (Learning rate) and we can also set the current position of $x$. The thing we need to think about is how to find $\nabla F(x_n)$.

Finding the gradient of a function:

If we want to find the gradient of a function for a point $x$, we need to differentiate the function for once with respect to $x$.

The result we’ll get by differentiating the function once is called the first order derivative of that function.

If we’ve forgotten calculus, nothing to worry. The sympy package of Python can find the derivative of a function for us.

In the following python code, the sympy package will find the derivative for our function $f(x) = x^2 + 5$.

You can ask, why do we need to take the first derivate?

Reasons to take the first derivative:

Now, let’s understand why we call the gradient descent algorithm iterative. The formula for gradient descent we discussed above tells us the direction and number of units to roll for the next position. But we can’t reach the minimum point by rolling the ball once. We need to roll the ball for a certain number of times. We need to repeat the process until we achieve the convergence. That’s why we need to use a loop to repeat the process.

Finally, we’ve known all the concepts that we need to write the code for gradient descent.

Now if we look at the plot, we’ll see the ball is rolling down and reaches the minimum point of the plot.

This is the intuition behind gradient descent algorithm.

Till then practice what you’ve learnt from this article.

Constructive criticism will be appreciated.