Smart World through the eyes of "The Internet of Things (IoT)"

Imagine a day when you come out in a hurry from your home, go to your office or market and you forget whether you’ve locked the door or not. You forget to switch off the lights of your room or to extinguish the oven. Now what will happen? Would you like to come back to your home? No! It’s not a smart idea in the world of IoT. Just take your smartphone out of your pocket, open an app and lock the door, switch off the lights and extinguish the oven. And obviously you can do the same from anywhere in the world. The IoT technology has made this amazing scenario possible in our daily life and that’s why the Internet of Things is a buzzword at the present.

Now let’s know what IoT actually is – “The Internet of Things (IoT) is a scenario in which objects, animals or people are provided with unique identifiers and the ability to transfer data over a network without requiring human-to-human or human-to-computer interaction. IoT has evolved from the convergence of wireless technologies, micro-electromechanical systems (MEMS) and the Internet.”

There was a time when we were used to use the internet only through the computer. But now we use internet in our mobile, smartphone or in many other smart devices. What if we can provide the connectivity of internet into every objects in our real world? This is the concept from where IoT was originated. It’s all about connecting the physical world to the internet and perform any action as we want.

Although the concept wasn’t named until 1999, the concept of a network of smart devices was discussed as early as 1982, with a modified Coke machine at Carnegie Mellon University becoming the first internet-connected appliance, able to report its inventory and whether newly loaded drinks were cold. Afterwards the term “Internet Of Things”/”IoT”was first proposed by Kevin Ashton in 1999.

Now let’s discuss how the IoT technology works. There are 4 basic steps that makes IoT working. These are shortly described below-

1. Unique Identity of “Things” : Provide an unique identity to every “thing” that needs to be connected. It may be an IP address. However, due to the limited address space of IPv4 (which allows for 4.3 billion unique addresses), objects in the IoT will have to use IPv6 to accommodate the extremely large address space required.

2. Ability to Communicate: Provide these “things” with the ability to share information. It should be the wireless internet, which is keeping the world connected.

3. Senses: Provide these “things” with senses to gather information as required. These are the sensors which are getting smaller and cheaper day by day.

4. End User Interface: An interface that allows us to share the information with these “things”. These may be mobile/smartphone app, TV-Monitor, Laptop etc.

Let’s discuss about some sectors where IoT may play some amazing role in near future.

1. Reality Search Engine: Will you find the expected result if you ask Google, “Where is my keys?”, “Where is my shoes” or “Where is my child whom did I lose yesterday in the market?” ? IoT may make it easy for you!

2. e-Health: There will be available smart T-Shirts like “D-Shirt” which will record your heart rate, GPS location, route, speed and altitude. BodyGuardian, A wearable sensor system that can remotely read a patient’s biometrics (ECG, heart rate, respiration rate and activity Level) to keep people out of a hospital monitoring setting.

Here is an infographic of year 2040 in the eyes of IoT: 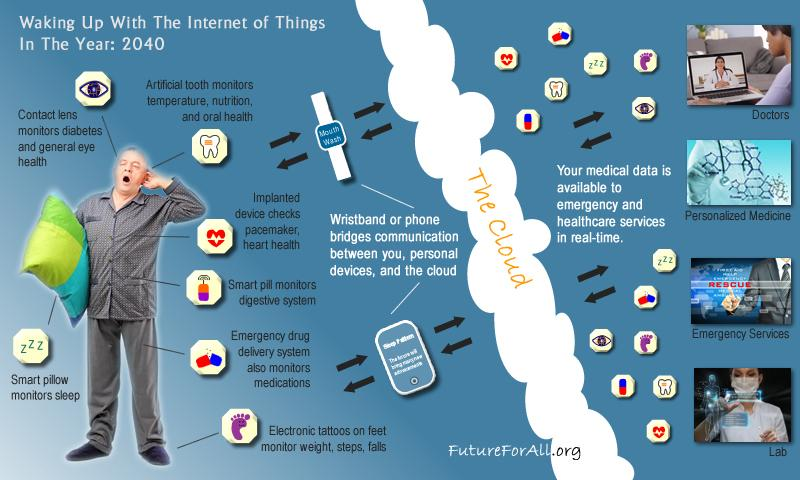 Security and privacy are major concerns in IoT—and addressing these concerns is a top priority. These are legitimate concerns. New technology often carries the potential for misuse and mischief, and it’s vital to address the problem before it hinders personal privacy and security, innovation or economic growth. Manufacturers, standards organizations and policy-makers are already responding on several levels.

Now, what do you think about the future of IoT?

The technologist assumes that by 2032 each person will be surrounded by 3000-5000 smart things in our everyday life. And the Tech experts also estimate that the IoT will consist of almost 50 billion objects and 25 billion devices by 2020.

So, let’s wait for the smart world of IoT.